If you’ve been jumping over mud puddles and dodging rain drops this summer, you can still show your dog pride with Fuzzy Nation’s collection of silk screened umbrellas with some of our favorite breeds.

They server up a platter of cuteness offering their Umbrellas with a French Bulldog, Bichon, Yorki, English Bulldog, Chihuahua and American’s #1 favorite family pet, the Golden Retriever!

On sale for $18 and will ship in 4 days! FuzzyNation.com 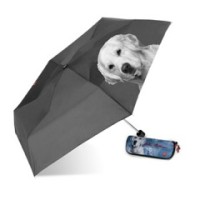 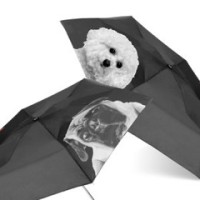 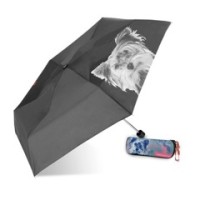 Dara is in Orlando, Florida this week for the Global Pet Expo and the debut of the PupStyle by Dara Foster product line! If you are going to be at the Expo stop by booth # 847.
Dara will be on hand Wednesday taking photos and answering any of your pressing pet fashion questions!

PLUS! Keep an eye out for a rolling stroller full of PupStylish Chihuahuas as our editor Carlene Mahanna will be at the Expo checking out all of the latest pet gear with her trio of cuties (Emmet, MeiMei and Kiki!).

PupStyle’s Dara Foster has signed a licensing agreement with European Home Designs, a manufacturer of pet products, to create a line of dog fashion, accessories, and bedding. The line, which is expected to launch in spring 2012, will range in price from $9.99 to $49.99.

Dara Foster launched www.pupstyle.com over 10 years ago. She is a pet fashion stylist and TV personality and can be seen regularly as the pet style contributor on NBC’s Today Show, The Wendy Williams Show, The Nate Berkus Show, as well as TV Land, E!, ABC News, and more. She was recently profiled in the New York Times and has signed a TV production deal with Kinetic Content.

The deal with European Home Design was brokered by Sharon Bennett of Bennett Branding and Holly Rawlinson of The Name Game.

Dara’s profile in the New York Times Style section is up! This profile is the culmination of 8+ years toiling away on PupStyle in relative obscurity. Get ready WORLD you are about to get PupStyled!